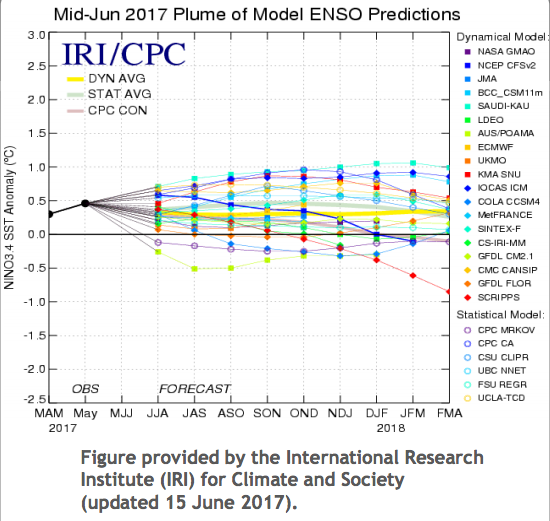 The latest long-range model guidance for El Nino Southern Oscillation (ENSO) has been shying away from an El Nino signal (Figure 1). A few of the more respected seasonal models do hang on to enough warming for a weak El Nino, but it appears we will be dealing with neutral to perhaps a very weak El Nino this winter.

With the ENSO ranging from neutral to a weak El Nino and the QBO being easterly, we can start to gather possible analog years. As we head into the Fall, the sea surface temperature anomalies, Siberian snow cover, and observations of the tropical forcing will come into play to shape our winter forecast.

The analogs for ENSO-neutral conditions and an easterly QBO show a strong signal for cold air in the North Central US into the Eastern US. The only area of a hint of warmth is across the Southwestern US (Figure 2). If we add in possible analogs of a weak El Nino, the core of the cold air shifts to the East and the West begins to warm up (Figure 3). Since we are seeing some very strong easterly values at the top of the stratosphere we may see some very high values of the easterly QBO and those analogs would suggest a stronger Western US ridge and deeper trough over the Eastern US (Figure 4).

Some of the years mentioned were really cold winters making it easy to lose sight of some of the warmer years (2005-06, 1953-54, and 1956-57). This list will get more concise as we head into the Fall. But with the QBO heading into the easterly phase, this builds the likelihood of high latitude blocking, which displaces the cold air in the Arctic into the Middle Latitudes. This is because of the generation and circulation of the ozone favoring a warmer stratosphere over the arctic and cooler over the tropics. Research by Labitzke et al (2005) also showed the likelihood of stratospheric warming events with easterly QBO’s and a low solar winter. We once again expect this winter to feature low solar activity as we continue to slide towards the solar minimum in 2019-20. (Figure 5)

The analog years discussed yield drier than normal conditions across much of the Midwest into the Northeast and back towards the Southern Plains.

The latest ECMWF monthlies is just getting into range for winter. The newest run will come out tonight for a new outlook for December into January.