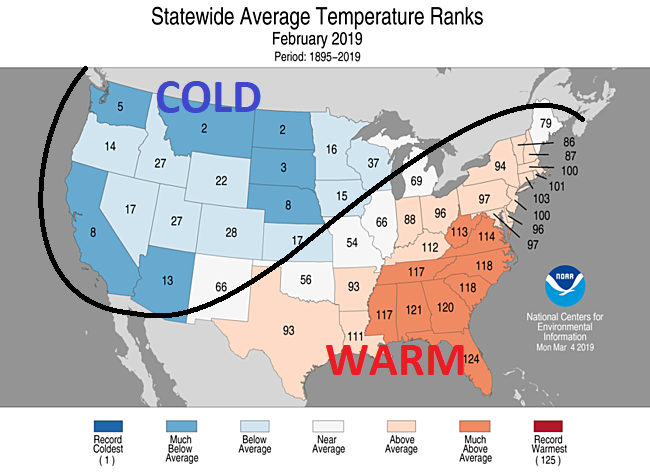 February 2019 was a record-setting month in the Upper Midwest in terms of snowfall, particularly across north central Iowa, southeast Minnesota, north central and northwest Wisconsin, and portions of the Michigan Upper Peninsula. 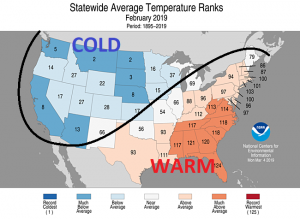 Figure 1. Statewide temperature ranks for the month of February 2019. The black line shows the general persistent upper air pattern, with nearly constant cold air in the western U.S. and warm air in the eastern U.S. Image courtesy of the National Oceanic and Atmospheric Administration (NOAA).

A persistent upper-air pattern that comprised multiple rounds of cold air diving into the Pacific Northwest during the month of February helped to reinforce a steadfast western United States upper trough. As a result, most areas in the western U.S. were colder than normal in February, with nearly every state encompassed in this persistent trough observing one of their coldest 30 Februarys on record in 125 years. Meanwhile, a persistent ridge was found across the eastern part of the United States, with nearly every state in the Southeast U.S. recording one of their ten warmest Februarys on record. Figure 1 shows this pattern that was fairly unwavering throughout the month.

Between the western trough and eastern ridge, a series of troughs with shorter wavelengths ejected out of the larger western U.S. trough and largely tracked northeast from the Desert Southwest to the Great Lakes generally in the vicinity of the black line in Figure 1 depicting the upper air pattern. In addition to bringing the conditions for atmospheric lift for snowfall, this storm track was able to tap into Gulf of Mexico moisture at times, and with the Upper Midwest on the colder side of this pattern, temperatures were categorically sufficient to support snowfall. While this was naturally an average storm track and the track of each surface low varied somewhat, the incessant nature of this pattern meant that all the ingredients came together for a persistent and record-setting snowy month across the Upper Midwest.

Figure 2. Observed snowfall across the Upper Midwest in February 2019. Data to produce the map were obtained from 76 official climate stations and approximately 1400 CoCoRAHs stations across 10 states in the north central and Midwest U.S. Labels for official National Weather Service (NWS) climate locations indicate the February snowfall at each station, followed by the annual snowfall (through March 31), separated by a forward slash (/). The red line encloses areas that received at least half of this annual snowfall in February alone.

Figure 2 shows the observed snowfall in February across the Upper Midwest. Over 36 inches fell during the month across an extensive area from southeast Minnesota to much of the Upper Peninsula of Michigan. Nearly this entire region also received over half its annual snowfall during February. A remarkable four feet or more of snow also fell in a broad area across northern Wisconsin to the Michigan Upper Peninsula. Meanwhile, many locations on the warm side of the persistent storm track from southeast Iowa eastward to Illinois and Indiana received less than six inches of total snow during the month.

Eau Claire, Wisconsin saw 53.7” of snow in February, easily shattering its records of 28.2” for its previous snowiest February (which was surpassed on February 12) and 35.3” for its previous snowiest month on record in January 1929. The current annual snowfall of 87.4” there is only 1.9” shy of its all-time snowiest season of 89.3” in 1996-1997. Minneapolis-St. Paul also recorded their snowiest February on record with 39.0” (previous record: 26.5”) and fourth snowiest month on record.

Two of the more significant snow events in February, particularly in the Upper Midwest, were February 11-12 and 23-24. Figure 3 shows snowfall for these two events, along with the surface low tracks for each event and combined snowfall for the two events.

On February 11-12, a surface low tracked from the Central Plains into the Midwest, curving northeast and then north across southeast Michigan and into Ontario. This track brought a significant ice storm to the Chicago area, with a quarter to a half inch of ice across the area, as warm air flowed northward on the east side of the low. As the low turned to the northeast and then north across the lower Great Lakes, snow in a deformation zone on the low’s northwest flank rotated along an pivotal axis in Wisconsin, bringing an extended period of snow. Over a foot of snow fell across a broad area of northern Wisconsin into the Upper Peninsula of Michigan, with enhanced snowfall just west of Marquette on northerly lake effect winds. 15.7” of snow fell in Wausau, Wisconsin, the heaviest February snowfall on record for one event. Wisconsin Rapids reported 16.4” from this event. Nearly all of Wisconsin and most of Michigan north of a Grand Rapids to Saginaw line saw over 6” from this event. Small sections of southeast Minnesota and northeast Iowa also saw over 6 inches.

Figure 3. Observed snowfall for (a) the February 11-12 snow event, (b) the February 23-24 blizzard, and (c) combined snowfall for these two events alone, focused on the area from northern Iowa to the Upper Peninsula of Michigan. Maps (a) and (b) also show the approximate track of the surface low associated with each of these two events. Data to produce these maps were obtained from official climate stations and thousands of CoCoRAHs stations across the United States. Official climate station snowfall was reported from midnight to midnight local standard time, while CoCoRAHs reports are made from 7am to 7am each day.

The February 23-24 blizzard brought a narrow but significant swath of snowfall from Kansas to the Upper Peninsula of Michigan along with blizzard conditions in much of this area. Over 6” of snow fell in west central and north central Kansas, southeast and eastern Nebraska including Omaha, west central to north central Iowa, southeast Minnesota including Rochester, west central to northern Wisconsin, and the Michigan Upper Peninsula. Areas west of Marquette again saw significant lake effect snow on northerly winds off Lake Superior. Many of the same areas of Wisconsin that saw significant snow on February 11-12 again saw significant snow on February 23-24. Eau Claire, Wisconsin reported 14.5 inches of snow, Rhinelander, Wisconsin saw 15.4”, and Rochester, Minnesota reported 12.1”. Most roads across southeast Minnesota, western and northern Wisconsin, and the Michigan Upper Peninsula were impassable and closed due to the heavy snow and high winds. Parts of Interstates 90 and 35 in southern Minnesota were closed for over 24 hours.

Between these two events alone, Rhinelander recorded 30.8”, Wisconsin Rapids saw 25.4”, Wausau received 25.2”, Marshfield, Wisconsin saw 24.5”, and Eau Claire received 24.0”. Rochester received 19.2”. A large area from southeast Minnesota to northern Wisconsin received over 18” from these two events, with the Upper Peninsula of Michigan receiving more due largely to lake effect snow, which actually continued beyond the dates of February 11-12 and 23-24. These amounts in southeast Wisconsin and northern Michigan were nearly half the record monthly snowfall totals in these areas – and in some locations were more than half the February snowfall.

A nearly persistent upper air pattern with a cold trough in the western United States and a ridge in the eastern United States brought record snowfall to the Upper Midwest as several significant shortwave troughs ejected into the Plains and tracked northeast into the Great Lakes region. Two of the most significant events on February 11-12 and 23-24 accounted for nearly half of the monthly snowfall in many areas, including across the area from southeast Minnesota to the Upper Peninsula of Michigan, a region that broke many February and monthly snowfall records.

trueWeather has a feature-rich weather dashboard tailored to your specific needs – including mobile apps and instant access to our team of meteorologists and much more. Clients trust trueWeather to provide an unbiased view into how weather will directly impact their operations – starting at just $350/annually. Give us a call at (844) 614-1298 to receive a no-hassle instant quote, or email us at directsales@truewx.com.